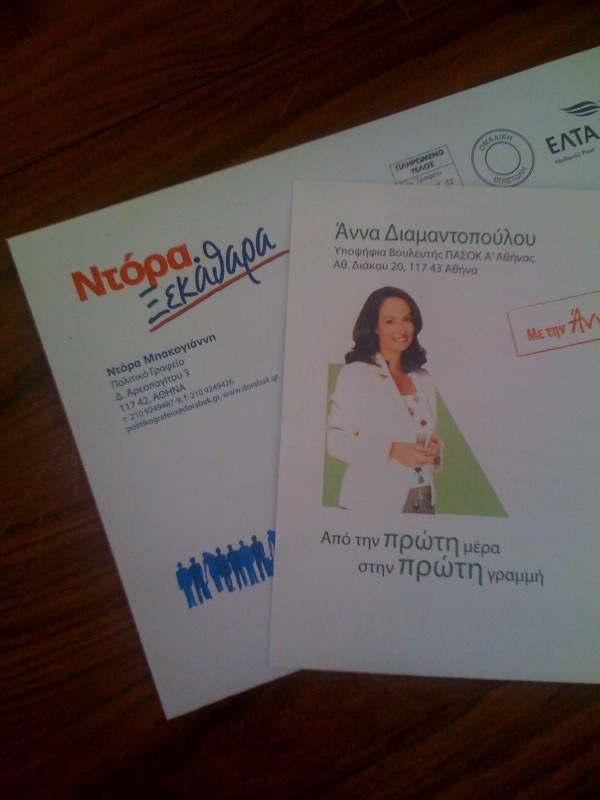 I consider myself as being far from a typical supporter of any political party (actually I dislike the notion of being a fan in any context), and in fact I’ve voted for three different parties in my short career as a voter so far. To be honest, I do not even “believe” in a single party or strict ideology of the existing political spectrum, I think socialists vs conservatives, right vs left etc is a detached from reality, more than outdated and obsolete classification; to me, it’s just realists vs illusionists and those who break eggs trying to make things happen versus those who let things vastly underperforming just be.

That said, I’d like to move a social step ahead and post here the person and party I endorse for the forthcoming greek elections of October 4th. I really liked the relevant meme before the US elections, when people I respect, not related to politics or affiliated to a party, publicly argued about their voting preference. In the greek political reality, however, taking such a clear stance and endorsement is potentially thorny; being ‘colored’ or politically tagged has a long history of existence (and clearly there is a reason for that), where almost everyone tries to read between the lines for political preferences and hidden interests. I believe however that truthful revelation of current political thoughts can only benefit -at least in the long-term and macro scale- the dialogue at large, and, while I confess that I’m far from a well-informed voter or closely tracking the greek political scene, I’m willing to publicly contribute my humble views and potentially wrong assumptions in changing this suboptimal equilibrium.

First of all, I think that the parliamentary system in greece cannot but fall short of expectations, given that every member of the parliament in almost every single case votes according to its party line, often due to imposition reasons. I’d love to see more degrees of freedom enabling anyone to stand up for what she believes in, but as long as this is not the case, I believe that our vote mostly regards the election of a government, rather than electing representatives of a legislative body. After all, members of the parliament typically represent their party and not their voters and this extra level of abstraction results in a critical distortion.

That said, and given that, to my limited knowledge, no party is considering a coalition, to me the choice is narrowed down to the two major parties, namely “new democracy” (the governmental “conservative” party) and “pasok” (the previously governmental, “socialist” party). (The far-right and far-fetched “laos” and secondary the communist (?!) “kke” parties were already and by default out of question for me.) And, in this context, the choice seems to be relatively easy at the given time.

But, let’s be honest, we greeks have learned not to expect radical improvements or significant changes from a new government. And this should not sound weird after all. Considering that the public sector controls (in first or second level, both directly and indirectly) the biggest part of the local economy, and the black economy being, according to various estimations, closely equal to half the size of the “real” one, it is not difficult to imagine that change is hard and painful, if at all possible, while competitiveness and innovation have to wait. So I may argue this is not a governmental but mostly a major social problem in the first place, and we probably need to dictate change in our mirror first, instead of just blaming those ‘messiahs’ at the top of the pyramid.

However, a government is elected to steer, not to follow, to be passionate about serving, not bored and apathetic, to lead by example, not just cheerlead. And, if the above sound like being self-evident to you, I’m sorry to say that, to me at least, Mr. Karamanlis, the current prime minister, stood for the latter in the last 6 years. I believe that failures, even at this scale, are maybe not a bad thing, provided that you are trying hard, to learn, to improve and finally succeed. But inaction is a completely different and unforgivable behavior, and I consider it unacceptable, especially when you manage so many hard-working and talented people who are really trying to make a difference (like Mr. Chatzidakis, the minister of development, to name an example). This view of mine of the ruling party could be radically different, if Dora Bakoyiannis, currently minister of foreign affairs, was at the top; I consider her an efficient and dynamic woman trying to get many things done. But, I’m not willing to vote again for a person standing for the Greece I hate, or making me feel ashamed the next time I see him in Brussels or next to Barack Obama.

The other option seems to be a more appealing one. The first thing I thought about the opposition leader, G. Papandreou, when he took control of his party some years ago, was that I’d like to watch the experiment of him running the country, actually have Greece run by someone with a scandinavian background and canado-american education, as open-minded as it gets, ignorant enough for the public opinion to stand, for example, in favor of the legalization of soft drugs and the friendship with our turk brothers. During the years, however, and if running a major party is comparable simulation to running a country, I do have some second thoughts. There were both good and wrong choices, cases where he stood strong or weak for principles I respect, a leadership style I admire or some skills I do not. Maybe it’s just that politics are essentially a hybrid art, of the good and the bad, merging your good intentions with the harsh reality and vice versa. But, for now, what’s important to me in the bottom line, is that I clearly see a passionate man willing to serve the society and not his party or ego, a true believer in a number of topics I’d do my best to see my country progress in, and I’d like to offer him my humble endorsement.

That said, I don’t have high expectations. Even the best of intentions, when met with questionable implementors across the managerial chain cannot but result in questionable results. And I personally believe that both major parties carry such pathogenic characteristics, it could not be otherwise after all. For example, I can pretty well recall the feeling I got during a recent socialists’ conference I was invited to give a guest speech on entrepreneurship; I thought most of people surrounded me were nascent civil servants, and this is typically not something to be proud of in the greek context. However, I think that the shortest path to change, today and in the given environment, is trying to leverage on the good parts of this existing ‘infrastructure’, instead of setting up from scratch a new one, and this is another major reason for my endorsement, while I hope that we have more solid options in the next elections, and I’m ready to fully reconsider all of the above observations and assumptions.

So, all in all, these are my rough thoughts and intentions regarding the elections five days ahead. I’m looking forward to your -hopefully as unbiased as it gets- comments and corrections and I hope that many of the above reasonings will prove to be accurate; or else I’ll have at least a well-documented view to reconsider :)